ENLZ devices are designed for use in damage containment systems in cable distribution grids. ENLZ provides synchronized phasor measurements of currents and voltages of zero sequence, processing of states of short-circuit current sensors and transmission of information to data collection system.

One ENLZ can be used to monitor two cable lines - there are two analog inputs for phasor measurements on board and 6 optical inputs for detecting actuation of short-circuit current sensors.

ENLZ works in conjunction with ENCM-3 RTU, which synchronizes time in the ENLZ with the accuracy required for synchronized phasor measurements. ENCM-3 doesn’t only synchronize time, but also conducts continuous polling of ENLZ transmitting data to the upper layer over the Ethernet channel or over the cellular network (3G/2G) via RS-485 interfaces.

Two analog inputs of the ENLZ are designed to measure 3I0 and 3U0 - for this purpose, zero sequence current transformers and voltage measuring transformer with winding 3U0 are connected to the ENLZ through the voltage step-down transformer VMT. Measured signals are transmitted to upper level in the form of tele-measurements by two values (amplitude and phase angle).

It is recommended to install ENLZ at the boundaries of cable network sections, which will be included in the one-phase ground fault (UIO) and short circuit (CP) localization system.

Algorithm of localization of the one-phase ground fault is based on the analysis of amplitudes and angles of current vectors and zero sequence voltage measured at different points of the grid. 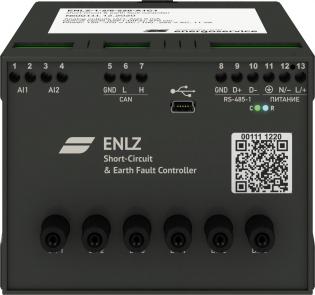